Il fantasma dell'orso, the Phantom of the Bear

Umbria is very rainy nowadays. Since we returned to our seventh heaven, Al Settimo Cielo. two weeks ago, we have had only two dry and sunny days.
Once the sun is out, it is nice and warm and one can be outside without a jacket, but the sun hardly comes out, which is very unusual.
It seems like nature is making up for its entire water shortage of the last two years at once.

To cheer ourselves up, we went to Orvieto last Thursday. We were in luck, it was dry, though cloudy. After a stroll around the market and town we decided to have lunch in la taverna dell'orso, the tavern of the bear. We both chose a good fresh home made pasta.
Being a real man, husband chose the 'umbrichelli alla cinghiale', the regional pasta of Umbria, a kind of thick round spaghetti with a wild boar sauce. I took pasta dell'orso, a vegetarian one with a delightful sauce made of fresh tomatoes, basil and scamorza, the smoked cheese of Puglia, a region in the south. They suggest you have it with tagliatelle, which would better stick to the sauce. Of course I couldn’t ignore such expert advice.

At some point we heard a sound of breaking glass from the kitchen. The owner passed by with a look of apology. Husband reassured him with 'porta fortuna' (broken glass brings good luck).
Then the owner responded: “We actually have a phantom here in the restaurant, truly. Some years ago I was having lunch with the crew in the adjacent room. We were three ladies and two men. The three ladies were sitting on one side of the table and the men on the other. At some point the ladies started shivering, all at once. When we asked them why, they responded that they had the feeling that somebody was passing behind them and tapping on their backs.
None of the men had left his place. Isn’t that strange”, he said.
“We decided afterwards that it must have been the phantom of Richard, a former owner from the ‘80s, an American. He was always a good guy, so nothing to worry about.'

The owner then went to the adjacent room, where other guests were having lunch.

On his way back to the kitchen, he stopped, saying, “ Thinking about the phantom, another story popped into my mind. Some years ago we had a chef here from the south of Italy. A good chef and a nice guy too. Except he was very edgy. After he had worked for us for some time, a bottle fell from the high shelf, not for the first time, just like it happened some time before. He suggested we send for an exorcist. He explained that he had noticed an atmosphere, that petrified him, as soon as he stepped over the threshold of the restaurant.
We tried to reassure him, telling that it was just the phantom of Richard, who always was a good guy who wouldn't hurt a fly. Nothing to worry about!

That didn't reassure the chef and he resigned...”

Popular posts from this blog 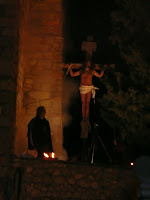